Happy Release Day to A.L. Jackson! Come back on Thursday for BFF K’s review of the stunning Where Lightning Strikes!

My smile faded when I looked back again to where he lingered near the door. My head drifted to the side to take him in as his expression shifted through a thousand emotions.

And a longing that nearly brought me to my knees.

Desire trembled through my body.

I wanted to crawl inside him.

To discover every secret.

Even though I got the crushing feeling knowing him would be the end of me.

The air filled up with him. So thick I wasn’t sure I could breathe.

Gently he wound his fingers through my hair. Not so gently he tugged my head back and pinned me with that stare. Slowly he dipped down, my stomach in a thousand blissful knots as he left a dizzying trail of kisses down my neck.

Tingles spread in a wildfire of sensation.

Then his voice was at my ear. Whispering belief. “Blue.”

She was so scared and unsure and innocently brave. Because she wanted all the things I’d learned the hard way the world didn’t have to give. But she wanted me to fight for them anyway.

Callused fingertips trailed down my sides, and I trembled when they edged under the hem of my shirt. Skin to skin.

“Is this okay?” he asked, his voice like gravel.

My answer scraped from my throat. “Yes.”

Lyrik pulled my tee over my head, slow but sure.

A cool rush of air sent a rush of chills skating free across the flames. My chest heaved as Lyrik stared down at me in my jeans and bra. Eating me up with that irresistible intensity.

I knew my eyes were wild as I looked up at him. My pulse hammered and my spirit thrashed.

“Blue,” he murmured again as he went down onto his knees. He peeked up at me every few seconds as he worked the bandage free from my side. My belly shook as he peeled the bandage away and exposed the statement that had been etched into my side over my ribs, from my hip bone to just under my arm pit on the left side. And I knew the area needed to be cleaned. But somehow right then, I didn’t care.

I just wanted him to see.

The four simple letters were written in a big, scrolling font, and swirls and flowers extended from the first and last letters.

Lightly, he drummed his fingertips over the design, not quite touching the raw skin.

His unyielding gaze latched onto mine. “I think you already have.” 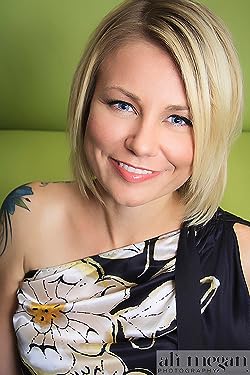