Craft beer and the sexy men who brew it.

A beautiful neighbor. A complete stranger. That’s all she was when I moved in next door.

Adelyn Maxwell is my neighbor but she’s no girl next door. The more I come to know her, the more I discover she’s a good girl with a lovely dark side. And maybe I don’t want her to stay on her side of the fence.

I want to disturb the rhythm of her pulse.

I want to see the way her hair spills on the bed when she lies beneath me.

I want her to teach me the dirty pretty things she desires behind closed doors. And she does.

But mostly I want to leave my mark on the most intimate, untouched part of her body. Her heart.

A seemingly insignificant intersection of our lives neither of us recalls suddenly becomes a pivotal moment in our future. We aren’t strangers at all. And our paths aren’t crossing for the first time.

These twists and turns of fate will become one of two things: a wrecking ball to tear us apart or the connection to bond us together forever.

I fell in love with these Brewery Boys in Book #1 in the Lovibond Series. Tap was an absolutely terrific read, so I was beyond anxious to get my hands on Stout, Book #2. I’m happy to report that Oliver and Adelyn’s story was everything I hoped it would be and MORE!

Oliver is certain he’s in LUST after getting just one look at his fiery and beautiful next door neighbor. Adelyn is drawn to his brains and his brawn. But, could there be more? The two begin a friendship that is sweet and comfortable, but it’s also full of an underlying heat and spark that they can’t deny. Oliver and Adelyn have to decide if exploring the potential explosive chemistry is worth the possible damage to their friendship and neighborly harmony.

Both Adelyn and Oliver are themselves a little damaged; but working hard to lead happy, healthy, productive lives and overcome their scarred pasts. Their respective pasts intertwine in some really startling and earthshaking ways. There is A LOT going on here – at least 3 interwoven storylines occurring simultaneously. Just when I thought one story was gearing up to be the turning point in the book, it would morph into something else all together. I enjoyed chasing these divergent tales to uncover the final outcomes. There is a sub/dom/abuse storyline that actually surprised me a little. (This isn’t a spoiler! If you dig a little on FB/Instagram/other blogs, you’ll find several teasers that give an idea of where this particular thread is going.)

Stout – Lovibond Book #2 is full of heart. The characters are endearing, the plot is engaging and the setting is fun and unique. I enjoyed the entire book, but the last 25% is especially outstanding. Stout is smoking HOT, unexpected and OH SO GOOD! This entertaining book is a great continuation of this enthralling series and another absolute MUST READ! Now I’ll be anxiously awaiting Porter!

“Are you all right?”

I see what I think is concern in Oliver’s eyes. “Not at all.”

Oliver comes to me, takes the dish towel from my hand and tosses it onto the counter. “I want you to leave that nipping son of a bitch here and go for a ride with me on my bike.”

“Have you ever ridden on a motorcycle?”

“No.” Yes. But not of metal and rubber or the speed in which the two will carry us.

“Then go for a ride with me. We’ll cruise around the block and if you don’t like it, I’ll bring you right back. Promise.”

I look at Oliver’s attire and then mine. Shorts and tank top probably aren’t ideal for riding. “Give me a minute to change.”

“Okay.” He grabs a biscuit. “Saving these for anyone?”

I return wearing faded skinny jeans, a fitted black V-neck T-shirt, black combat boots. I have no intention of brushing my hair for an hour to remove a bazillion knots so I go with a fishtail braid. “Ready.”

“Wow. You look like one badass chick.” I hold out my foot to better display the lace-up boots Maurice calls shit-kickers. “But you don’t just look the part. You are a real badass.” Oliver’s words are a reminder of last night’s blunder.

“Yeah, about that.” Do I own it and roll with the badass perception he has of me? Or do I apologize for going there? Was it TMI?

I can’t decide so the words don’t come.

“I understand more about what influenced your decision than you might think. Don’t be sorry you told me. And don’t be freaking out about it.”

He points at the spread of baked goods that says otherwise. “You are totally freaking out about telling me. But don’t. If there’s anyone who gets it, it’s me.”

If there’s anyone who gets it, it’s me. Something has happened to this man. He knows pain. “Tell me about it.”

I don’t have to flesh it out. He knows what I’m asking for.

Hook, line, and sinker. I’m sucked into the storm spinning out of control behind the dilated blackness of his blue eyes.

What I see there confirms I’m right. Something bad has happened to Oliver Thorn.

He stops and stares at me. “It’s a custom Ducati Monster 821 Dark. It’s not lovely. It’s badass.” I giggle. Boys and their toys.

“Maybe you’re the lovely badass.” Damn. There’s that smile again. I bet he can use it to get anything he wants from women.

Lovely. I’m accustomed to compliments from men. I’m often told I’m sexy. Pretty. Beautiful. I once took pleasure in hearing those things from men, especially Martin, but now I receive those words with a grain of salt. And I will this time as well since I’m unsure if Oliver makes a habit of using flattery on women.

However, badass strikes a different chord in me; it’s a reminder of the things I told Oliver last night. All my wrongdoings.

He holds up a black leather jacket. “It’ll get a little cool even though it’s May. Especially if we’re still out after dark.”

I turn and slip my arms into the sleeves. I spin around and he surprises me by closing the zipper teeth and pulling the clasp upward until it stops at my breasts. “A little snug.”

I suck in but it makes my chest rise bigger. No way the zipper is going any further like that.

It’s obvious the jacket belongs to a woman smaller than me. “Guess my boobs are bigger than your ex-girlfriend’s.”

“Breathe out and relax your shoulders.” He pulls the leather together and then yanks the zipper clasp up and over my D-cups. “Your boobs are bigger than my sister’s. This is her jacket.”

“Oh.” I smile on the inside, not daring to let him see me delight in him noticing my boobs. Or my relief in knowing he hasn’t put me in something belonging to an old girlfriend.

“Next.” I take the all-black helmet he offers and slip it over my head. I study the outline of his facial hair as he works on adjusting my chinstrap.

“I feel like a little girl being dressed by her daddy.”

He grins but avoids my eyes. “There’s so much I could say to that.”

“I suppose there is.”

“Despite being squeezed like I’m wearing a corset, yeah.”

He grins and grabs the end of my braid, twirling the end around his finger. “I love red hair. It’s my favorite.”

Oliver Thorn is touching my hair, twirling my hair. My red hair, which he says is his favorite. Do not pant so he can hear you, Adelyn.

I wondered if he intended for lovely badass to be flirtatious. But there’s no questioning this.

He’s insinuated he has demons in his past, which give him the ability to understand my actions, but he must see I’m a little unhinged emotionally. It isn’t possible to miss.

“I once despised it. I used to bleach it blonde with drugstore hair color.”

“Never. Do. That. Again.” There’s an alpha-like tone in his voice. Almost growly. And it sends a sharp tingle down my body. I haven’t felt that in years, and I welcome it.

Have you met Tap? 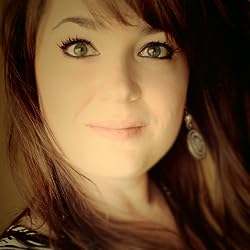 Georgia resides in rural Mississippi with her wonderful husband, Jeff, and their two beautiful daughters. She spent fourteen years as a labor and delivery nurse before she decided to pursue her dream of becoming an author and hasn’t looked back yet.

When she’s not writing, she’s thinking about writing. When she’s being domestic, she’s listening to her iPod and visualizing scenes for her current work in progress. Every story coming from her always has a song to inspire it.

Representation: All questions regarding subsidiary rights for any of my books, inquiries regarding foreign translation and film rights should be directed to Jane Dystel of Dystel & Goderich.