Welcome to Briarwood Academy where love can be a little bad, a lot wicked, and sometimes twisted.

FOUR RED-HOT BOOKS about the BAD, WICKED and TWISTED characters of Briarwood Academy, featuring a dirty-talking gym owner, a football player, a sexy rock star, and a British bad boy.

ALL BOOKS ARE ON SALE and FREE ON Kindle Unlimited! 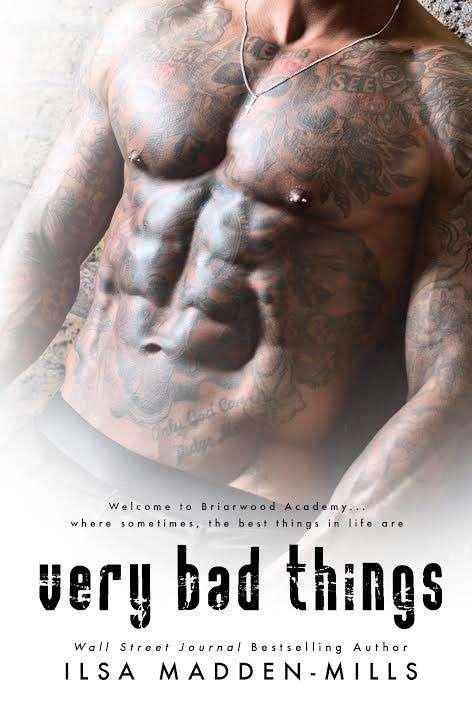 Leaving behind her mansion and Jimmy Choos, Nora Blakely becomes a girl hell-bent on pushing the limits with alcohol, drugs, and meaningless sex.

Then she meets her soulmate, but he doesn’t want her.

Sexy gym owner Leo Tate has one rule: never fall in love…until Nora shows up with her list of bad things. He resists the pull of their sizzling connection, hung up on their age difference. 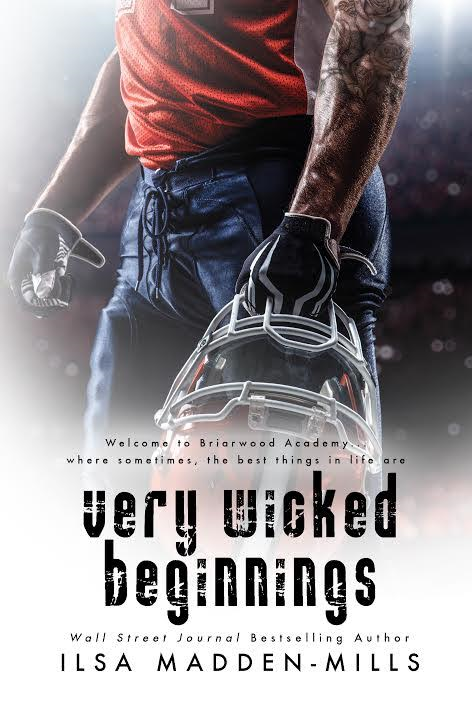 When wicked ballerina Dovey Beckham meets football star Cuba Hudson, she didn’t plan on having her heart shattered into a million pieces. He’s the bad boy with a dark past, and when he falls for Dovey, he knows she can’t be part of his future. 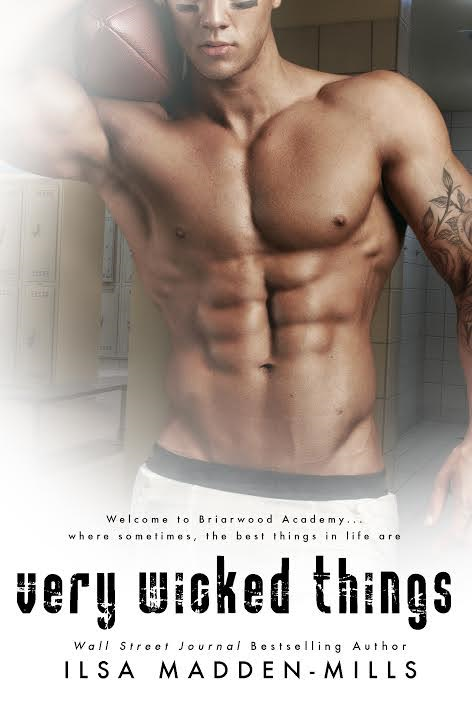 Dovey Beckham is a ballerina from the wrong side of the tracks. Cuba “Hollywood” Hudson is a wealthy football player with fast cars and even faster girlfriends.

Their passion is electric, their connection deep, but once in a lifetime kind of love doesn’t come easy, especially when dirty money, past sins, and old flames come calling. 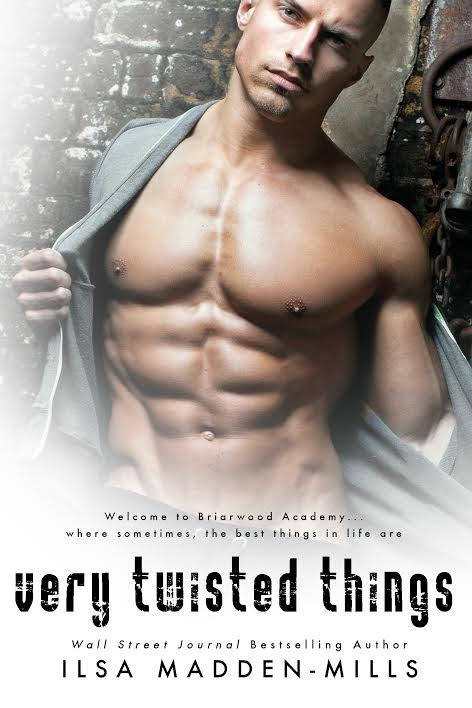 Violet St. Johns is a talented violinist hiding out in a Hollywood mansion, struggling to forget the devastation of her parent’s sudden death.

When they finally come face-to-face, sparks fly and clothes comes off. But giving his heart to a girl isn’t Sebastian’s plan; falling for a guy who craves attention isn’t Violet’s.

She’s addicted to all things fantasy, including unicorns and sword-wielding heroes in books. Other fascinations include frothy coffee beverages, dark chocolate, and Instagram.

Title: Steady as the Snow Falls

Hired by a stranger to write his life story, Beth Lambert arrives at a seemingly abandoned house in the hills near her hometown. She knows the rumors, she knows it is dangerous and unwise. But she needs the money. And she needs to prove that it isn’t a mistake to think she can make a career out of a dream.
Inside the house of emptiness and coldness, she finds a man with curt words and haunted eyes. He is eccentric, odd. Brutish, even. He scares her, and he intrigues her. When she learns who he is, she wants to run. But there is the money, and there is the dream, and eventually, there is simply Harrison Caldwell. The haunted man with the black, ugly truth.

“What’s happening between us?” When she didn’t immediately answer, Harrison turned.

“We’re getting to know each other’s heart. I’m glad I was introduced to yours.” Beth gingerly set her hand to his chest, felt the beat of his life against her palm. “I like your heart, Harrison.” She looked up, her eyes clashing with his.

“I like your heart too,” he told her falteringly. I FLOVE this cover; it is absolutely charming and I can’t wait to read this book! I never thought that, at 40, this would be my life. Mourning the loss of the man I vowed to love for life was hard enough. Online dating, starting a business, and falling in love was never the plan.
Victoria Bennett has been blessed with a loving husband, a wonderful son and amazing friends. Always the organized planner, Victoria was thrown life’s curve ball when she found herself a widow and single mom before 40. After mourning the loss of her husband and rejoining her friends and family in her once simple life, Victoria finds herself venturing into the world of online dating with little success.
After hanging up her keyboard and focusing on new experiences and hobbies, Victoria is as surprised as everyone else when her favorite pastime leads to a new career and passion for life. When a friendship turns to romance, her life is once again thrown for a loop. Like everything new in her life she takes on the relationship with gusto, and a series of mishaps.
Victoria soon learns that sometimes the life you’ve planned isn’t the life you lead. It is still your life, just your life rewritten. I had to have heard him wrong, right? There is no way this guy is serious. And yet, by the look on his face, I’m pretty sure he is.

This is the worst date ever.

“I said I would love to take you back to your house and pleasure your feet,” he says with more than a hint of disdain.

Well, hell. I had heard him correctly. He said pleasure and feet. Together. On purpose. Oh, I’m going to pleasure my feet all right, by sticking my stiletto up his ass. This guy is nuts if he thinks I’m taking him back to my house so he can get his rocks off by messing with my feet. I get it; I am wearing some pretty hot shoes. I thought they were ridiculous at first, but my sister, Charlotte, insisted they were a must have for my new life. I still don’t know why I need a new life, but I listened, and if I’m completely honest, I love them. Peep-toe, leopard-print, five-inch stilettos that make me feel like I can hold my own in this crazy world. They give me the power I need for moments like this.

“You know, Phillip, I don’t think I’m really there.”

I’m not likely to ever actually be there. Sadly for Phillip, I lack a poker face and imagine my eyes have fluttered a minimum of ten times while I purse my lips and inhale through my nose and out through my mouth.

Looking across the table, I am greeted with a furrowed brow and a look I can’t quite put my finger on, but I know it isn’t welcoming. Shit. I’d hoped to at least leave this date with a friend. Today we have the release day launch of Heidi Joy Tretheway’s The Phoenix Campaign!

1. This is one of the coolest posts ever for a new release….To celebrate the release, Heidi is sharing with us a behind the scenes look at the photo shoot and creation of her sexy covers, as well as a fantastic giveaway!! Be sure to check it all out!!

2. I completely blame Heidi for my book-insomnia-induced haze. This post was supposed to happen YESTERDAY and I totally spaced it, my apologies….be sure to check this out today!

Grace Colton’s life is a blur—security, appearances, and a desperately fast ramp-up to Election Day. Political consultant Jared Rankin is pulling the strings to win the White House with the Conover-Colton ticket.

But the fragile relationship Grace and Jared forged could be ruined by secrets traded for political leverage. She’s hiding her new relationship with Jared from the public, and concealing a deeper secret from everyone.

When Grace reveals the explosive truth to her running mate, squeaky-clean Senator Conover must confront his own haunted past. Grace’s future—and their campaign—could be ruined by the lies meant to protect what they love most.

Behind the scenes at a sexy photo shoot

Have you ever seen a book cover and thought, huh, I think I’ve read that before? Maybe you’re just seeing the same stock photo. It’s no secret in author circles that the best stock photos make the rounds … a lot. That’s why I decided to do a custom photo shoot.

Thanks to my massively talented friend Adrian Hale, a hair and makeup artist who works with photographer Josh Baker of AzulOx Photography, we arranged a shoot featuring the gorgeous Callisto and David:

The setup: Adrian’s house. The girl let us totally mess up the place, bless her heart.

While David and Callisto were total pros, I was in the corner accidentally making inappropriate comments (oohs and aahs and that’s hot and I’m going to need a moment alone). We saw the shots pop up on a tablet in real time. In most cases, the last shot was the best. Josh said, “I know when we’ve got it right. That’s when we stop shooting.”

We took inspiration from Pinterest and from the idea of a push-pull dynamic in Grace and Jared’s relationship throughout the series. The models were actually pushing and pulling on each other during the shoot, which makes their muscles flex and makes the pose more dynamic.

My favorite shot is pure improv. She’s a trained ballerina and he’s an acrobat, so they know how to move their bodies in amazingly beautiful ways. Callisto was imitating Kate Winslet’s moment on the bow of the Titanic, played by David.

They were preparing for a pose like this. What a difference lighting and perspective makes (comparing my shot from the side vs. Josh’s professionally lit photo, shown here on his camera).

Now for the hard part: choosing a favorite image. I loved this photo for David’s amazing abs in this pic, but some readers felt that it didn’t show enough connection for the characters.

In the end, I chose the photos that felt right. Here’s the before and after for The Phoenix Candidate, the first book in the series:

And here’s the before-and-after for The Phoenix Campaign, book 2 in the series:

I hope you enjoy the series!

Heidi Joy is a sucker for campfires, craft cocktails, and steamy romance in books and real life. She sings along with musicals (badly), craves French carbs, and buys plane tickets the way some women buy shoes.

Her first career as a journalist took Heidi behind the scenes with politicians, rock stars, chefs, and detectives, all of whom inspire her stories. Heidi Joy is currently working on her eighth book from her home in Portland, Oregon. She adores hearing from readers at author.heidi@gmail.com.

Fangirl Moments and My Two Cents | Adventures in Writing

2 Greek Girls Reading | For Whom The Books Toll

The Phantom Paragrapher | A Life Bound By Books

Between The Lines | All Romance Reviews